On Sunday we held our third and final 2013 Science and Food public lecture: The Science of Pie. Renowned pastry chef Christina Tosi joined us all the way from New York to explain her process for creating new desserts, and Los Angeles native and super-star baker Zoe Nathan shared her tips for baking the perfect apple pie. Guests indulged in delicious goodies from Zoe Nathan’s Huckleberry Café, Compost Cookies from Momofuku Milk Bar, and espresso brewed by four talented baristas. 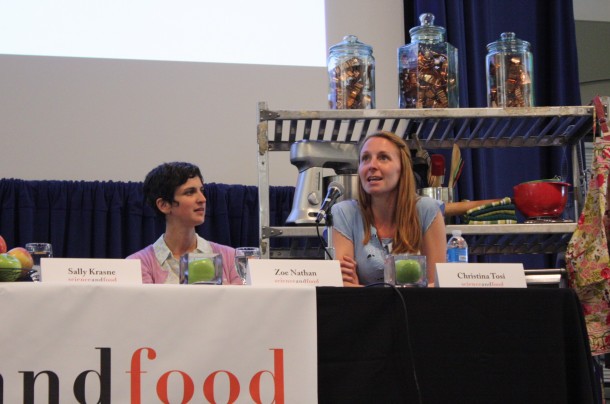 Zoe Nathan and Christina Tosi answer questions from the audience after their lectures.

And, of course, there was pie.

For weeks, students from the UCLA Science and Food course have been studying the apple pie and using scientific inquiry and experimentation to try to create the “ultimate” apple pie experience. Students examined everything from how different apple varieties behave in pie filling to how the size and shape of the pie affects baking. Several students also played with unconventional ingredients, including avocado oil, yogurt, chia seeds, and whiskey.

Students prepare their apple pies the morning of the event. 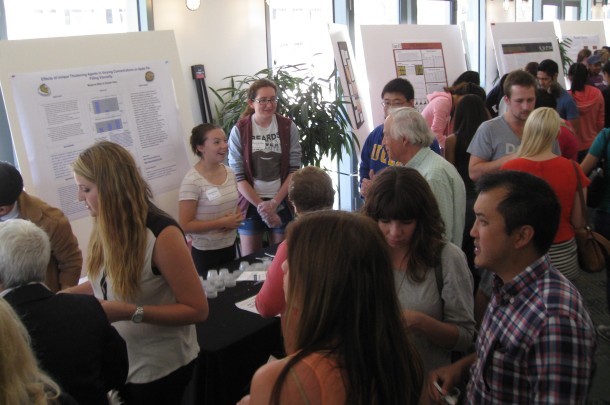 Students share their research projects and apple pies with the public.

The students presented their research projects and pies at Sunday’s event. While the public enjoyed sampling the scientific treats, the pies were scrutinized by an esteemed panel of judges made up of chefs (Christina Tosi and Zoe Nathan), food critics (Evan Kleiman and Jonathan Gold), and scientists (UCLA Professors Andrea Kasko and Sally Krasne). After tasting the pies a talking with the students, the public voted for their favorite pie and the judges settled on three additional stand-outs. The lucky winners all took home wonderful prizes from our friends at Breville.

The Science of Pie was the perfect end to a fantastic lecture series. We are so grateful to our amazing lecturers and all the people and sponsors who made the lectures possible. And although the 2014 lectures might seem impossibly far away, don’t worry—the Science & Food blog is not going anywhere! Keep an eye on out for more exciting food science posts, profiles, recipes, and maybe even a few videos through the rest of the year.

Alex Atala at UCLA: The Primitive, the Modern, and Ants – Eater

About the author: Liz Roth-Johnson is a Ph.D. candidate in Molecular Biology at UCLA. If she’s not in the lab, you can usually find her experimenting in the kitchen.